Sharon Shinn, The Shape of Desire 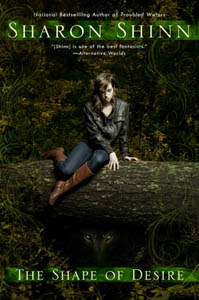 Sharon Shinn’s novel The Shape of Desire is a good, old-fashioned romance about a girl who loves a werewolf. Were-moose. Were-bunny?

Maria Devane, a thirtysomething Missouri tech worker with a reasonable support network of friends and family, has been in a committed relationship with exotic (and exotically named) Dante Romano – a shape changer, who turns into any number of non-mythological animals against his will – for going on fifteen years. She has built her life around him, and feels she would die without him; but the relationship is hard on her, as Dante is now human only a few days each month.

Most of the book is a critical look at Maria’s life and the choices she makes as she manages a relationship with a man she hardly sees and won’t admit exists. She has become an expert at lying, she tells us. She hides Dante’s existence from her mother and her close-as-sisters cousins; she doesn’t mention at him at work to her entertaining, gossipy co-workers.

These co-workers include Kathleen, a woman whose story closely parallels Maria’s: her husband is abusive, a fact that she hides (with limited success) from those who know her.

This parallel of Maria’s story with Kathleen’s takes a front seat in The Shape of Desire, overshadowing the rest of the plot (murders have started occurring in the neighborhood, and it looks like an animal – one who can perhaps shift shapes? – is responsible). Maria, the first-person narrator, tells us about that parallel in some detail: she has a hard time judging Kathleen’s choices, because loving unconventionally is a choice she, too, has made; she, too, worries that the man she loves may be a danger to her; she, too, feels that she would die if he were gone forever, that she cannot leave him.

I love that Shinn does this. It’s an anti-Bella Swan move, in a way: she has her main character actually examine the somewhat self-destructive choices she makes in order to prioritize love of someone dangerous. That left me cheering. The strength of this novel is its aggressive, human-adult realism: Maria’s experience feels like your friend’s, your cousin’s, yours – something you’ve heard and struggled with yourself. After all, we ask ourselves, who are we to judge these unconventional relationships? Where do we set the bar?

But The Shape of Desire is, at heart, a romance. We know within a few pages that Maria isn’t going to make the hard choice, isn’t going to leave her potentially lethal lover – after all, she tells us so herself, over and over again. Of course she will make other hard choices aplenty.

The book is a great read, engrossing and emotional and visceral in the best ways. It did leave me wondering what Shinn meant by having her romantic heroine’s storyline parallel so closely that of an abused spouse.

Maybe she meant for us to ask the question.

Other reviews worth checking out:

I'm a writer/mom/software trainer living in Austin, TX.
View all posts by christafrench →
This entry was posted in Book Reviews and tagged fantasy, romance, werewolves. Bookmark the permalink.