The Mary Sue has an update on Disney’s upcoming Maleficent. Squee!

Sleeping Beauty has always been one of my favorite Disney movies. I get that Aurora is lame, and that her “gifts” are lame (requirements for being a princess: beauty, ability to sing, and . . . what was the third one going to be? ability to accessorize?), and all that. But Maleficent! Maleficent is the best! She turns into a dragon! And commands the powers of hell! Or at least has the chutzpah to say she does!

So I’m tentatively excited about this Sleeping Beauty reboot featuring Maleficent. Angelina Jolie definitely has the chops to pull it off if they’ll give her good material.

One of the things that’s awesome about Maleficent is that she doesn’t hate Aurora because she’s prettier (like the evil Queen in Snow White). Her stated reason for wanting to wreak havoc is that she wasn’t invited to be one of the fairy godmothers of the princess – ie, she wants power. Power is a good villain motivation that doesn’t have to do with being insipidly female. Insipid, Maleficent is not.

But the synopsis for the new film (via /Film) has Maleficent described as originally a “beautiful, pure-hearted young woman.” I mean. And Aurora holds the key to Maleficent’s chance at “true happiness” at the end, which doesn’t sound promising. I understand that it’s hard to have a movie protagonist be actually super evil, but . . . don’t screw this up for me, guys!

Also, like I talked about yesterday, there’s something inherently problematic in rehashing these old stories without adjusting for gender/race/etc. bias. It sounds like they’re trying, though – at one point “Maleficent rises to be the land’s fiercest protector.”

So, ok. I’m on board for now. Fingers crossed!

Update: Check out Jesus Alfonso Sanchez’s rad picture of Maleficent spanking some other villains at cards. I mean, I assume she’s spanking them, because: Maleficent. 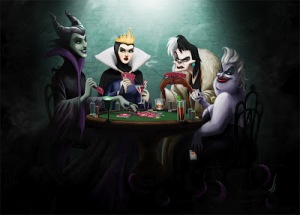 I'm a writer/mom/legal secretary living in Austin, TX.
View all posts by christafrench →
This entry was posted in Uncategorized and tagged movies, princesses, villains. Bookmark the permalink.